We are excited to celebrate 25 years of representing leading names in contemporary art! Newzones is pleased to host a book signing of The Sleeping Green: No Man’s Land 100 Years Later with Dianne Bos on Saturday, October 28, 2017: 2-4PM. An artist talk will take place at 2:30PM. Both Harry Vandervlist and Josephine Mills (co-authors) will be in attendance.

We are thrilled to be launching Dianne Bos’s publication The Sleeping Green: No Man’s Land 100 Years Later which was published by the University of Lethbridge Art Gallery in partnership with the Canadian Cultural Centre in Paris, which includes essays by Harry Vandervlist and Josephine Mills! The Sleeping Green series has achieved international recognition in publications such as ArtNews, Blouin ArtInfo International, Paris Voice and Le Monde to name a few. Photographic works from The Sleeping Green series, which commemorates the historic battlegrounds of World War I, were first shown at Newzones in October 2015.

Dianne Bos uses a line from British poet and soldier Isaac Rosenberg’s famous WWI poem “Break of Day in the Trenches” for the title of this exhibition. The Sleeping Green consists of extraordinary photographs taken in ‘no-man’s land’ one hundred years after the war, at significant Canadian battlefields in Belgium and France.

Ms Bos states; “In ways other than the presence of memorials, does a memory of that past persist at these sites? Tens of thousands of people who were killed in that war are part of the landscape. Is there a memory in the soil, water, plants, and trees of their presence? Does an echo of war still resonate in the sky above?”

Many of Bos’s recent exhibitions feature handmade cameras, walk-in light installations, and sound pieces. These devices enable investigations of journeying, time, and the science of light. International group and solo exhibitions since 1981 include: ‘Light Echo’, a collaborative installation with astronomer Doug Welch, linking celestial and earthly history; ‘Reading Room‘ exploring the book as a camera, and ‘See the Stars‘ a site-specific multi-aperture tent installation for the ‘Midnight Sun Camera Obscura Festival‘ in Dawson City, Yukon. Her work is currently part of the traveling exhibitions Poetics of Light, Contemporary Pinhole Photography (New Mexico Museum of Natural History) and Seeing, The Science Gallery, Dublin, Ireland. Most recently, we are proud that the National Gallery of Canada has collected four of Ms Bos’s photos for their permanent collection.

A selection of works from The Sleeping Green series are on exhibition from Saturday, October 28, 2017 – Saturday, November 18, 2017. 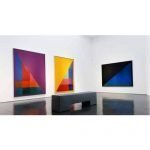 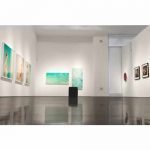