Kevin Sonmor – “Equus and the Others”

In his newest series, Equus and the Others, Kevin Sonmor continues to concentrate on the iconic image of the horse by broadening his palette as well as his vocabulary of marks, forms and notions of space. With the image of the horse bearing so much weight as a mainstay in history, fiction, art history, military history, and romance, Sonmor is now using it as a frame from which to hang his paint, and allowing this paint to continue the narrative where the image is leaving off.

Born in Lacombe, Alberta, Kevin Sonmor completed his MFA at Concordia University in Montreal in 1991. He has exhibited widely across Canada, the US, and more recently, Europe. Sonmor has exhibited in several public galleries and museums, including Glenbow Museum, University of Waterloo, Mendel Gallery, Art Gallery of Mississauga, and Sherbrooke Museum of Fine Arts. In the fall of 2014, Sonmor had a solo exhibition at the Art Gallery of Grande Prairie in Alberta. Sonmor is a recipient of numerous Canada Council Grants and his work can be found in many private and public collections including the University of Waterloo, Art Gallery of Algoma and Government of Canada. 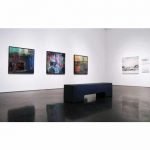 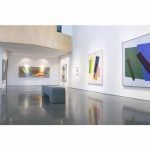