Along with Jack Bush, William Perehudoff is one of the most celebrated Canadian Colour Field painters of his generation.

Beginning his career in the early 1940s, William Perehudoff carried on a dialogue with American Colour Field and European abstract movements. By 1949, he was studying in New York with Amédée Ozenfant, who founded the Purist Movement with Le Corbusier in 1918.

In 1962, Perehudoff met Clement Greenberg, the most important art critic in the New York School of Painting. As a result of his meetings with Greenberg in New York and at the Emma Lake Workshops in Saskatchewan, a shift in Perehudoff’s painting took place and his focus turned to formalist abstraction.

Throughout his career, William Perehudoff received accolades in commissions, exhibitions and awards, including exhibitions at the Noah Goldowsky Gallery, New York, the Hirshhorn Museum and Sculpture Garden, Washington, DC, Meredith Long Contemporary, New York, and several exhibitions at the Mendel Art Gallery, Saskatoon. Perehudoff continued to receive several honors in the 1990s and 2000s. He was a member of the Order of Canada and the Royal Academy of Art, held an Honorary Doctorate of Laws from the University of Regina, received the Saskatchewan Order of Merit and was awarded the Queen’s Diamond Jubilee Medal.

In 2010, Perehudoff was the focus of a full-scale traveling retrospective organized by the Mendel Art Gallery, Saskatoon, Saskatchewan, curated by Karen Wilkin, esteemed art critic and the foremost expert on Colour Field painting. In her essay, Wilkin writes, “Perehudoff’s abstractions (…) are self-evidently autonomous constructions in the language of paint, deliberately detached from explicit reference. Their aim is plainly not to replicate appearances but rather to stir our emotions through wordless relationships of colour, eloquent intervals, thoughtfully deployed shapes, and nuanced surfaces.” 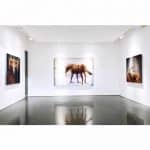 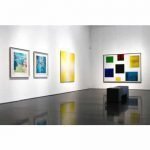