John Barkley, “Returning to the Source”

Newzones is pleased to announce a new solo exhibition by John Barkley, “Returning to the Source”.

This body of work reflects a shift back to a more intuitive process of art making in which the artist attempts to reach into his/ her depths, or what is referred to as the psyche, the unconscious, the ground, or the source. The work emerges from a dialogue of equality in which the canvas responds to the artist’s marks and in turn the artist acts. Here the painter is attempting not only to resolve formal relationships but dredge up revelatory symbolic content or archetypal content. In the words of Paul Tillich, “to express that which is of ultimate concern”.

While the imagery in this exhibit is diverse it results from an honest attempt to find meaning and significance through ones craft. As a result, the works evoke the evidence of a spiritual thirst that is manifested in the appearance of symbolic content. Natural elements like water, rocks, trees, and earth are depicted along with blue and dark void forms and there is a substantial materiality that is exposed both below and above the surface all working towards referencing the archetypal feminine.

Barkley’s paintings are about mankind’s tendency to impose structure on nature. Nature balks at being tamed, and does its best to bring itself to the state in which it was meant to be, no matter what we do to it. They are also about our desire to frame the cosmos, by explaining it – but it insists on remaining mysterious.

Barkley has exhibited extensively across Canada and internationally and is included in numerous corporate and private collections. 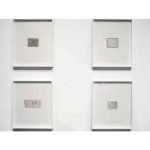 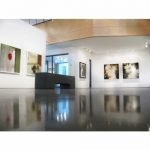