Colleen Philippi – “A to Z”

Newzones is pleased to announce “A To Z”: the much anticipated solo exhibition of new artwork by Calgary’s own Colleen Philippi.

Colleen Philippi’s artwork immediately captures the attention of the viewer. A sense of mysticism comes from her highly creative and personal visual vocabulary of secrets, treasure, allegories, astronomy, poetry and memory, working to create unique moments in time.

Philippi investigates the use of assemblage to resemble the found object. This artistic process is driven by self-referencing allusions, such as the use of painting palettes, letters, scraps of images and textures as key visual elements.

Stylistically and conceptually, Philippi is assembling from visual building blocks: partial and full letters, word fragments, signs, basic geometric shapes and patterns, colour samples, paint and colour palettes, pieces of isolated or displaced furniture, human anatomy, images of landscape, insects, butterflies, etc. Combined, all of these simple components work together to create meaning to which the viewer adds his or her own significance.

Philippi’s artwork invites viewers to look closely to see how it is constructed. Throughout her creations, there is a visual use of “tromp l’oeil” effects, in that handles are not initially apparent and what appears to be collage is in truth painted by the artist’s hand.

“Opening small wooden doors of Colleen Philippi’s mixed media assemblages, is like looking into one’s own subconscious…small handles beckon us to open the little doors which reveal a hidden compartment of collaged multi -layered images, painted in oil and acrylic. Philippi takes visual literacy to a new level, she has been influenced by a number of writers and their works… ie; Marcel Proust’s notion that memory has its own reality…”

Colleen Philippi, an Albertan, received her BFA from the University of Alberta in 1982. Since then she has been showing internationally and at Art Fairs with Newzones. Besides finding her magical assemblages in private, corporate, and Museum collections, locally, nationally, and internationally, she has completed commissions for Rotary Flames House, Calgary, AB., Island Hospital Anacortes, Seattle, WA, Swedish Foundation, Seattle, WA, and Pason Systems Ltd, Calgary, AB., amongst others. 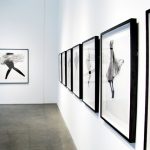 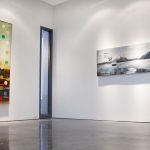