Newzones is pleased to announce a solo exhibition of new photographs by Calgary-based Dianne Bos, “La Porte: New Images from an Old World”.

If you are a follower of pinhole photography, chances are that you are aware of photographer Dianne Bos. Bos has exhibited internationally in numerous group and solo exhibitions since 1981 and her pinhole photographs have been included in important international exhibitions in Italy, Spain, France, Syria and Japan as well as solo exhibitions  across Canada. These include ‘Light Echo’, an innovative installation at the McMaster Museum of Art linking celestial and earthly history in collaboration with astronomer Doug Welch; It’s You!: Unexpected  Photographs from Papua New Guinea, at the Confederation Centre of the  Arts, Art Gallery, PEI.; and Reading Room at the Cambridge Galleries,  which explored the book as a camera. In 2011, Bos was also awarded the public art design commission by the City of Calgary for its lamp-post banners.

Of her work Bos states: “My work challenges the view of photography as a way to “capture an instant in time.” By using pinhole cameras and long exposure times I record, not an instant, but rather the passage of time at a site. Viewers have said that my work evokes the memory-image that remains for them long after they have viewed a familiar location. I think this recognizes the importance I have always assigned to time, memory, and capturing the essence of the place, in my images of architectural icons and classic traveler’s destinations. Bos received her B.F.A. from Mount Allison University in Sackville, New Brunswick and currently divides her time between the foothills of the Rockies and the Pyrenees, France. 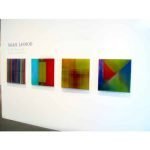 Marie Lannoo “In The Dirt With Eyes On The Stars” – 2013Past 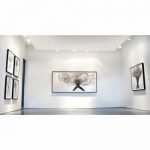