Marie Lannoo “In the Dirt With Eyes on the Stars”

A process driven artist, Lannoo paints with a particular interest in experimenting with materials and color patterns within the field of abstraction. Her work emphasizes materiality through layers of transparent high gloss paint that becomes responsive to its surroundings. “In the Dirt with Eyes on the Stars,” introduces a new material made of powdered minerals and resin with folding as a strategy to articulate space. Where layering suggests depth and luminosity, folding articulates dimensionality. These folding and color strategies are integrated into a framework that further accentuates the dimensional component of this work. Roald Nasgaard makes the following comments in “Marie Lannoo’s Existence Art”, which is included in the catalogue for “Through and Through and Through”, which exhibited at Mendel Gallery in 2010:

“Lannoo’s work draws the viewer deep into internal illusions replete with reflected invasions from the external world. At the same time, it reaches out to embrace and enfold itself around the body of the viewer, who sees the world as if with eyes in the back of his/her head…Lannoo significantly sheds her means of physical presence in favour of transparency and luminosity, for materials with a capacity to hold, radiate and reflect light, mirroring the world as well as reanimating it with colour.”

Lannoo was born in 1954 in Delhi, Ontario. She attended the University of Saskatchewan and studied painting at the Banff School of Arts as well as in Virton, Belgium. Her work has been shown in exhibitions throughout Canada including a solo exhibition at the Mendel Art Gallery, and internationally. The Government of Alberta, Canada Council Art Bank, University of Saskatchewan and many more have purchased Lannoo’s work. 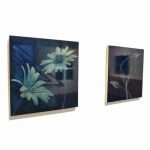 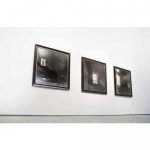