Newzones is pleased to present Coca-Cola Girls, a solo exhibition by Alex Katz, one of the most important American artists to have emerged in the last 50 years.

“Coca-Cola Girls” is a suite of 9 limited edition silkscreen prints, based on the original, large-scale “Coca-Cola Girls” paintings executed in 2018, and exhibited at Timothy Taylor in London, England, in November and December 2018.

Katz describes the nostalgia that sparked this series: “That’s Coca-Cola red, from the company’s outdoor signs in the fifties…You know, the blond girl in the convertible, laughing with unlimited happiness…” (Tomkins, 2018) The series depicts blond models in white one-piece bathing suits, set against a red background. Katz captures a variety of poses, sometimes seemingly in motion, of the girl(s) walking, sitting, standing, or subtly turning a head or gesturing delicately with a hand.

“Alex Katz…cannot be directly assigned only to Pop Art, and does not simply use Cola advertising with its unmistakable logo; rather, he builds up a completely unique image strategy that is at most remotely reminiscent of it, without, however, quoting it (so to speak) verbatim. Only his painting – subtle, melodic, strident and yet highly nuanced in its color composition – oscillates between narrative elements, the simplification of painterly and compositional structures, and an imagery that reduces itself to abstraction, so that at first glance it does indeed recall advertising posters.” (Reigenscheid, 2019)

At 91, American painter Alex Katz is best known for his unique realist style. He studied at Cooper Union School of Art in New York from 1945 – 1949 and after graduation, was awarded a scholarship the Skowhegan School of Painting and Sculpture in Maine from 1949-50. During his attendance at Cooper Union, Katz was exposed to modern ar t, and was taught to paint from drawings. Conversely at the Skowhegan School of Painting and Sculpture, he was pushed to paint from life. This would be a pivotal point in his career as a painter and to this day, he remains true to this in his practice. In 1972, he was awarded the Guggenheim Grant in Painting, and is now considered influential on much younger generations of artists; his works can be found in over 100 public collections worldwide. 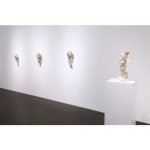 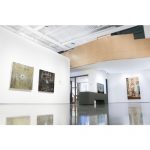