Born in Lacombe, Alberta, Kevin Sonmor completed his MFA at Concordia University in Montreal in 1991. Since then, he has exhibited widely across Canada and the United States for thirty-five years. Sonmor has had solo exhibitions in several public galleries and museums, including the Whyte Museum of the Canadian Rockies in Banff, Galerie Bellefeuille in Montreal, the Leo Kamen Gallery in Toronto, the Art Gallery of Mississauga, the Bruck Museum of Cowansville in Quebec, and the Art Gallery of Grand Prarie. Sonmor is a recipient of numerous Quebec Council Grants and his work can be found in many private and public collections including the University of Waterloo, the Toronto Dominion Bank, the Glenbow Museum of Calgary, the Royal Bank of Canada, the Canadian Council Art Bank, and the National Bank.

Sonmor’s iconic work pushes the boundaries between the historical conventions of landscape painting and the contemporary aesthetic of the abstracted landscape. An inspired student of Flemish painting, his visions are dark and atmospheric, yet filled with familiar still-life objects. These objects float through Sonmor’s rich, painterly landscapes, creating powerfully intriguing works that hover between contemporary and historic painting traditions.

Speaking of his own work, Sonmor states:

I am continuing to use imagery that – in whatever manner presented – has earned them a place in art history; maybe even cultural history. If their position as icons at various times are recognized, horses, canoes, memorial draperies, flowers, and fruit still lifes. But, as with all my work, it is the paint itself and the activity of painting, along with its attendant research and trials, that dictate the final painting. A multiplicity of styles and techniques within a particular exhibition, or even within a single painting are where my interest lies and what keeps me experimenting and searching…

…Sonmor paints with the certain craft of a master, with the sure touch of a virtuoso, not for the sake of the pride in technique but for something more imperative: for the efficacy of the art, for the sake of what art is
for — the penetration through to a truth of our essential nature that we realize but cannot hold for more than the briefest moment. 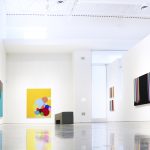 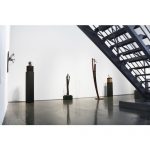