Newzones is pleased to announce a solo exhibition of new work by Angela Grossmann.

In ‘Girl Hood’, Grossmann continues to examine the issues relating to girls on the cusp of adulthood.

“Girls are objectified at an increasingly younger age. Social forces that have hit young women since the 70’s and 80’s have caused them to see themselves as sex object. Girls have become chameleons, constantly adapting their looks and values to the fashion of the day”, says Grossmann.

Grossmann began this work in 2006 with her ‘Alpha Girls’ exhibition. She has continued to work on this series of work, which has become a deep and rich area of study.

Grossmann has taught painting at Ottawa University (1991 to 1993) and University of British Columbia (1997-2000) and currently teaches painting and theory at the Emily Carr College of Art and Design. 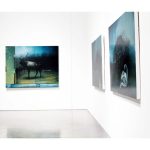 Bradley Harms – “Maximalism and the New Simplicity” – 2010Past