If you are a follower of pinhole photography, chances are that you are aware of photographer Dianne Bos. Not only has Bos received national and international acclaim for her innovative work, she is also one of the featured artists in Eric Renner’s seminal textbook: Pinhole Photography: Rediscovering A Historic Technique.

Bos’s upcoming exhibition will debut her new body of work which will include new colour images from Italy and France, as well as her ‘book camera’ series and a selection of light boxes. While printed photographs are the end product of the photo process, Bos is also interested in the devices that create images. Her ongoing ‘book camera’ series shows the direct connection between the camera and the image. In this case, the pinhole device is a book that Bos converted into a camera. Bos states, ‘the images taken with the book not only visually reflect the content but often collect the actual text of the book.’

Also to be included in ‘Wonder Rooms’ is a selection of light collecting boxes which Bos has turned into light boxes themselves – mimicking in miniature the illuminated spaces which were their original sources.

Bos has received her B.F.A. from Mount Allison University in Sackville, New Brunswick and currently divides her time between the foothills of the Rockies and the Pyrenees, France. Recently, Bos’s work has been included in important international exhibitions in Aleppo, Syria and Siena, Italy as well as a solo exhibitions at the Kamloops Art Gallery and the University of Waterloo Art Gallery. Her work was included in the 2005 Alberta Biennial of Contemporary Art and currently is touring nationally in two exhibitions, ‘Time and Space’, from the University of Lethbridge Art Gallery and ‘Dark Matter: The Great War and Fading Memory’, from the Confederation Centre for the Arts, Charlottetown, PEI. Bos has been collected by the Glenbow Museum (Calgary), the Alberta Foundation for the Arts, the Whyte Museum (Banff), and the Canada Council Art Bank (Ottawa). 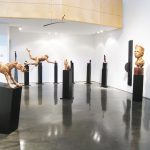