Newzones is pleased to present a debut solo exhibition of new paintings by Joseph Siddiqi.

The landscape has served as a central theme in Joseph Siddiqi’s work for the past ten years. It is a subject from which he has moved away from at times only to reapproach it from a different point of view. Siddiqi, in fact, is inspired by the urban landscape that surrounds him. While his paintings do take some from his somewhat grittier neighbourhood in Montreal, he is as influenced by historic Romantic painters such as Constable and Turner. For Siddiqi, landscape is a pictorial problem, a way to explore how form follows function and how architecture has both a noble quality and an ideal form.

Siddiqi’s painting process is intuitive and his series explore a narrative process. While the narrative might not always seem completely obvious, Siddiqi layers his paintings with pictorial clues that allow the viewer an entrance into the work. An up-and-coming painter, his work shows an astute sensibility for color combined with a sensuous depiction of symbolic form.

From abstracted images of the inner city to futuristic renderings of places to come, Siddiqi offers viewers an insightful look at our often tenuous relationship with our surroundings.

Joseph Siddiqi was born in 1972 in Montreal. He attended l’École Nationale des beaux-arts de Bourges in France, completed a BFA in Studio Art at Concordia University (1999) and graduated with the Dean’s Scholar Award from Boston University’s MFA Painting Program (2004). He has received grants from the Conseil des arts et des lettres du Québec and the Elizabeth Greenshields Foundation. His work is in the collection of the Canada Council for the Arts. 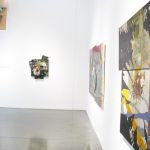 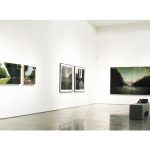