July is a month of spectacular going-ons here in Calgary – all of which, of course, begins with the Calgary Stampede. Pegged the ‘Greatest Outdoor Show on Earth’, the Stampede always brings in the summer with a bang!

Not to be outdone, Newzones is hosting The Big Picture Show which will run concurrently with the Calgary Stampede. Picking up on the Stampede’s love for the dramatic and the grandiose, The Big Picture Show will feature monumentally scaled paintings by some of Canada’s and the USA’s top artists. Showcasing the potential for the painting medium, the works in this show highlight just how phenomenal painting can be on a large scale. Muscular, breathtaking, visually complex – this only begins to sum up the work that will be shown in The Big Picture Show.

From Joe Fleming’s dramatic pop culture canvases to William Perehudoff’s iconic 80’s triangle paintings, all of the work in The Big Picture Show exemplifies the potential of the painted surface. 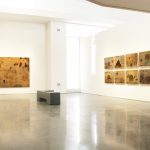 Timothy McDowell – “The Elegant Puzzle: New Works on the Theme of Nature” – 2009Past