Newzones Gallery of Contemporary Art is pleased to present Postcards from the Edge, a solo exhibition by Don Pollack.

Pollack’s work originates from journey and travel. His process often begins with extensive historic research, followed by an epic journey into the landscape as a means of experiencing the land. His paintings document a landscape that flows between two realities: one outside the picture attempting to capture nature and one inside the material flow of abstracting his experience of space. He utilizes the traditional methods of landscape painting through observation of light, shadows, and transparency, and merges that process with the emotional space held by his experiences in the land, memory, and history.

Pollack’s new body of work Postcards from the Edge, is inspired by Cape Breton, Nova Scotia – the edge of the Canadian landscape. The white border surrounding each painting suggests a card and the souvenir printed material – a postcard – sent our when on a journey; much like the journey Pollack takes as part of his artistic process.

Speaking of his new body of work, Pollack states:

These paintings are inspired from the landscapes along the eastern coves of Cape Breton in Nova Scotia. This is a region of first contact in North America. It is possible that the Vikings landed here. We know they were in L’Anse aux Meadows in Newfoundland a mere 700 miles north. This vague history inspires a blurred background in my painting suffused with a distant memory of home. My notions of a home landscape are rooted in the mythic North American styles of the Hudson River School and the Algonquin School Group of Seven. In Nova Scotia, I am reminded of the old maps that label some places ‘terra incognito’. The story here appears not quite written; it is still a landscape creating itself, it is a place that is part image and part abstraction, colour field painting and rendering, a place not yet born.

Having received his BFA from the University of Illinois in 1981, and his MFA from Ohio State University in 1984, Don Pollack is an accomplished realist painter that has exhibited extensively across North America and has been added to many private and public collections such as the University of Illinois, Urbana, IL; Reader’s Digest, New York, NY; Abraham Lincoln Presidential Library and Museum, Springfield, IL; and Hotel Arts, Calgary, AB. Alongside his career as a painter, he is the Adjunct Professor of Visual Communication at the School of the Art Institute in Chicago, IL.

Eastern Cove of the Cabot Trail, 2021

Eastern Cove of the Cabot Trail, 2021 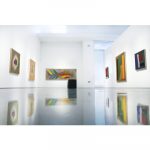 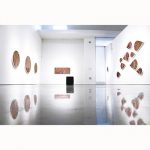