Newzones is pleased to present Decades, a solo exhibition of work by Canadian abstract painter William Perehudoff (1918-2013). Markedly one of the most celebrated Canadian colour field painters of his generation, Perehudoff’s acclaimed career spanned across six decades.

Native to a small town in rural Saskatchewan, William Perehudoff embraced the wildly unique natural world around him as a young boy. This translated to his career as an abstract artist, with art critic Karen Wilkin crediting Perehudoff’s explicit knowledge of colour relationships to the Saskatchewan landscape, where bold, lively skies, potent yellow canola fields, and other farmlands lend themselves instinctively to an abstract composition. While the playful spirit of the light from his surroundings cultivated itself in Perehudoff’s skilled hand, his work is comfortably situated in pure abstraction.

His formalist paintings derived from the inquisition of his own inner need; a visceral, mature use of structured imbalances within his compositions. Perehudoff contemplated the implications of paintings as a material beyond the medium, to break down the preconceived structures set in place from generations before him. Perehudoff’s artwork is not about a complex system of concepts intended for decipherable interpretation, it presents connections which exist entirely in their own right. His artwork is the interplay of light, colour, shape, and form. Perehudoff’s career as an artist was an homage to hard work and the desire of continued learning through hegemony instilled from peers and colleagues, as well as the insight of learning through learning; the act of self education. As a profound Canadian abstract painter, Perehudoff set a national precedence for contemporary artwork. His work has given rise to generations of artists working in the field of formalist abstraction and colour field painting.

Decades looks to celebrate the acclaimed career of William Perehudoff, specifically exploring his artwork spanning four decades from the 1960s to 1990s. Throughout each decade, Perehudoff’s work has progressed through visible and distinctive phases that have each made notable contributions to abstract art. The exhibition begins with a painting from his highly sought-after 60s era, during which time Perehudoff was known primarily for geometric abstraction and his large-scale works using circles and rectangular blocks of colour on raw canvas. From there the exhibition takes viewers through the 70s, when Perehudoff’s art was recognized by thin stripes on stained backgrounds, to the 80s defined using thick gels and the development of gestural and organic mark-making. It finishes with an exploration of his work from the 90s, which sees hard-edged rectangles overlap against a monochromatic background with a lively composition that burst towards the canvas edge. Decades showcases the visual timeline of Perehudoff’s career and identifies the distinctive characteristics of his paintings as they span across the decades of his practice.

Within his lifetime, Perehudoff’s significance and importance as a Canadian artist were cemented through many notable awards and honors. In 1994, he received the Saskatchewan Order of Merit, followed by the prestigious Order of Canada in 1998 and an Honorary Degree of Doctor of Laws from the University of Regina in 2003. As a result of his success, a traveling retrospective was organized in 2010 by the Mendel Art Gallery, Saskatoon, Saskatchewan (now Remai Modern), curated by the esteemed New York art critic Karen Wilkin titled, “The Optimism of Colour”. In 2012, Perehudoff was bestowed with the Queen Elizabeth II Diamond Jubilee Medal. 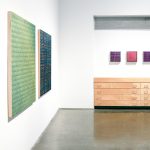 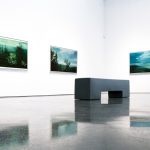